Mbuna (pronounced um-boo-nah) is the common name for a large group of African haplochrominecichlids from Lake Malawi. The name mbuna means "rockfish" in the language of the Tonga people of Malawi.[2] As the name implies, most mbuna are cichlids that live among the piles of rocks and along the rocky shores of Lake Malawi, as opposed to the utaka and other "haps", cichlids that live in the open water or on sandy shores or soft substrates. Some species of mbuna are highly sexually dimorphic, although many are not. Among biologists, almost all of the haplochromine cichlid species of Lake Malawi, including mbuna and nonmbuna such as the utaka, are believed to have descended from one or a very few species that became isolated in the lake. With rising water levels, new habitats could be colonized and the many isolated rocky outcrops allowed new mbuna species to form.[3] Their striking colors, intriguing behavioral characteristics, and relative hardiness make them very popular despite their unique demands for the home aquarist. 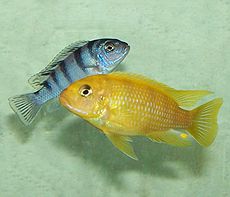 While many other haplochromines tend to be colorful in males though dull in females, both sexes of mbuna often have striking coloration. This is a pair of kenyi cichlids, Maylandia lombardoi.

These cichlids are some of the most colorful freshwater fish for the home aquarium. Mbuna are very aggressive and territorial fish, they are not suitable for beginner fishkeepers. A suitable aquarium setting includes many rocks, adequate filtration, caves, and hiding places; plants may be uprooted, so they are best avoided, but a small number will work well in the aquarium. One of these is Java fern, which may become the object of mbuna aggression, but will not be eaten due to an undesirable taste.

Mbuna exhibit strong social behavior and establish a clearly visible social hierarchy including well-defined and enforced territories. A dominant male maintains a spherical territory, only allowing females to enter this territory for breeding purposes. Overcrowding helps spread out the aggression caused by these territorial conflicts. They, like Astatotilapia burtoni, are maternal mouthbrooders and breed readily in good conditions.

All species from Lake Malawi thrive in the temperature range of 77-84°F. pH 7.5-8.4 is ideal with an almost pristine (near 0 ppm) ammonia and ammonium nitrite content.

Many mbuna cichlids are regularly stocked and sold by pet shops. Some of the most common ones are the bumblebee cichlid or hornet(Pseudotropheus crabro), golden cichlid (Melanochromis auratus), electric yellow or yellow lab cichlid (Labidochromis caeruleus), red zebra cichlid (Maylandia estherae), blue zebra (Maylandia callainos), and Melanochromis cyaneorhabdos (blue johannii). Many of these species are considered to have large territorial needs and aggressively defend these territories. Cichlids belonging to any of the genera listed below are considered mbuna.

Back to Ron's Blog